So there it is, barely three hundred yards from my front door, behind the dyke  the first International Huckelriede Kiosk Festival. My neighbourhood hosting an international event?

I’m standing on the dyke top with the scruffy, neglected playground and Buntentorsteinweg, the main road, behind me and, before me, the Kleine Weser, the narrow southern arm of the large river that divides our city. On the grass below me is the familiar old kiosk hut, from which, however, nothing has been sold for over a year, but into which new life has now returned. And: it’s enjoying company for a few days  four other kiosks, lots of long beer tables and benches, sun loungers, bales of straw and a tepee, in which the Huckelriede singer-songwriter is sitting and playing his guitar.

‘What’s that supposed to be?’ asks a man with a pair of nineteen-fifties glasses on his nose and a poodle on a lead. I shrug my shoulders and reply, ‘Art, probably.’ He gives a brief sniff, has a good look round and turns to me again. ‘Art?’ I nod; he shakes his head.

‘Well, come on then, Charlie; that’s not for the likes of us. It’s art.’ With that, he drags at his poodle, which actually looks as if it wouldn’t have minded staying for a while. I gaze after the two of them, musing for a moment on the status of art in the lives of poodle owners, then walk down the slope to the Dyke-Gate Writer in Residence, a friend of mine who sits behind a typewriter in the revitalised kiosk and waits for stories to come, that is, when she’s not on a tour of discovery in the neighbourhood tracking down stories  like today, when we have an appointment to play a round of golf. 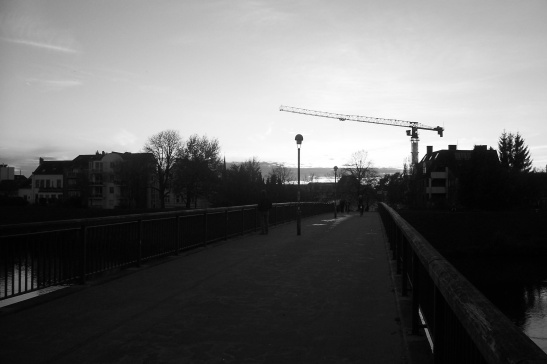 From the kiosk opposite we borrow everything we need for our first round of cross-country mini golf. With two golf clubs, two balls, a portable wooden ramp and a diagram of the course, we walk over to Hole 1, which is simply a pole stuck in the middle of a piece of grass that your ball is supposed to hit. Actual holes are very few and far between in cross-country mini golf; the course is not laid out artificially; instead, existing places, nooks and crannies, buildings or other objects are transformed into the constituent parts of a mini golf course. Flower tubs, manhole covers, bollards, lampposts or rusty iron bars can all represent ‘holes’  as long as there is a target, something to aim at that represents a challenge. The idea certainly makes sense; who needs a pre-cut artificial enclosure when the city itself is one large assault course?

The Dyke-Gate Writer in Residence and I both take three for the first hole, whose pitfalls include crossing a cycle path and the length of the grass that hasn’t been mown for quite a while. A few minutes later we’re standing in the middle of a traffic island in the new Dammacker housing estate, discussing whether or not we should use the ramp to help us get over the high kerb. As we’re talking, a taxi drives over my ball. The driver gives us a strange look, then drives on in his Merc. The people out for a walk seem more amused and even applaud when I manage to get my ball on to the disused flower bed with the help of the ramp.

At the next hole you have to manoeuvre the ball from the pavement on to a raised paved area. And the main thing here is to make sure that the ball doesn’t hit the wall so hard that it rolls back on to Buntentorsteinweg  which is of course exactly what happens. This time it’s my partner’s ball, which is carried off by a No. 4 tram that just happens to be whooshing by, and is then left lying in the gutter yards away. 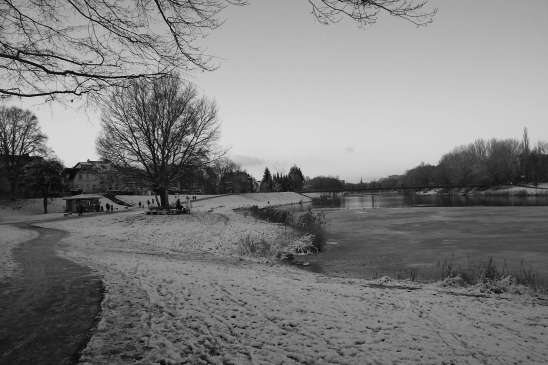 After some small talk with a married couple (‘Cross-country mini golf? Ah …’; ‘Kiosk Festival? How interesting …’), our route takes us through a back courtyard to a wooden bollard, from the top of which we have to drive off the ball. As the Dyke-Gate Writer in Residence is trying out her drive, I glance upwards to the garret window of my flat and try to imagine myself looking down from there, watching us and wondering what on earth those two are doing down there.

On the balcony underneath my dormer window my neighbour is out enjoying the sun; he waves to us. We wave back and stroll across to the playground opposite, where the hole is a tree trunk lying across the sandpit. One extra obstacle is a little boy combing through the sand with a plastic rake. His mother calls him back to her, while another woman, who calls her little girl to her side as soon as we arrive, shakes her head and says to the mother of the little boy, ‘Don’t worry, there was another bunch of these idiots here yesterday.’ She rummages around in her bag for a pack of Gauloises, pulls out a filter cigarette, clicks up a lighter flame and watches as the two of us, one after another, in spite of the ramp and our savvy tactics, come to grief at Hole 5.

We say goodbye to the kids, who wave with their little plastic tools, and their smoker mothers and stroll towards the Beginenhof to Hole 6, where I score my first and only hole in one.

After playing for about an hour, we encounter here and there on the tarmac, on the last few metres of the course, the corpses of balloons with the shrivelled festival logo. One last shot through the dyke gate and we’re back in the crowd at the Kleine Weser. In between kids holding balloons and grown-ups drinking coffee, there’s a pair of mallard ducks waddling around; someone is calling out, ‘Sandwiches  only one Euro!’; and the Huckelriede singer-songwriter is strumming his guitar and singing, ‘Huckelriede, Huckelriede, I love Huckelriede.’